Dubbed “PhishLulz”, the Ruby-based toolkit builds on Orru’s expertise in phishing. It spawns new Amazon EC2 cloud instances for each phishing campaign and combines a GUI from the PhishingFrenzy kit with the popular BeEF browser client-side attack framework for which he is a core developer.

It also sports a self-signed certificate authority, additional new phishing templates for various scenarios a hacker may encounter, and will in the future be even more powerful with automatic domain registration, for now limited to registrar NameCheap.

All told hackers using the toolkit will be able to send more convincing and much faster phishing emails from seemingly legitimate domains, be alerted immediately when login credentials are received, and send exploits and gain user target configuration information such as operating system and browser versions along with other running software via BeEF.

It also includes MailBoxBug which handles the fistful of popped email accounts that Orru says typically flows in at a rate of one a minute. It works on Office365 accounts with more support to follow. 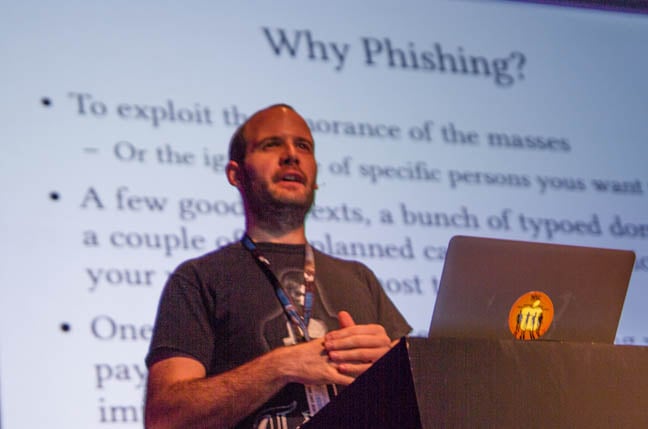 It took only two days for the hacker to gain domain administrator credentials after employees at the agency handed over VPN logins via Orru’s phishing campaign.

“I was in Poland, and they were in Australia, so I had to send the emails at the right time,” Orru told the hacking conference.

Orru says PhishLulz will help hackers get past the first time-sensitive hurdle of obtaining and utilising stolen credentials, saying that attackers will have perhaps an hour to exploit the dozen or so logins they receive before it is revoked by administrators.

He offered further pointers; the best times to send phishing emails are in the morning or just after lunch when staffer’s wits are less sharp. Few staff can identify dots from dashes in URLs, nor do they pick .covs .com.

Most phishing emails need to be highly customised to work, Orru says, unless the target is “dumb”.

Orru, an open source advocate, invited interested hackers to contribute to the project. ®