Few doubt that smart devices are the next technological revolution.The next generation of connected appliances is already starting to create the Internet of Things (IoT), and to connect users to their devices in ways that were impossible only a few years ago.

Remember when the personal computer first emerged, and it was promoted as a place to store recipes? Or when the iPad was released and articles suggested how it might be used? Like the personal computer and the iPad, the IoT is one of those ideas that is being developed because it is possible, not because it can fulfill any specific problem. Although examples of how to use the IoT usually involve timers for turning appliances on and off, the real purposes will probably emerge only after smart devices are everywhere.

That does not mean that the IoT won’t be a success, or revolutionize technology. However, it does mean that its consequences are difficult to foresee. Advising everyone to expect the unexpected is probably the only reliable advice — and that suggestion is hardly accurate for long range planning.

6. The Need for Open Standards

The IoT consists of a lot of individual devices with their own specifications. At this stage, that hardly matters, but a time will arrive soon when further growth will require that smart devices can communicate with each other.

Yet, although much of the IoT is likely to be built with open source software, universal standards and protocols lag behind the development of smart technology. The few efforts that exist tend to be specific to a technology, such as Eclipse IoT, and tend to focus on applying existing standards or protocols to smart devices rather than being developed for the new demands of the IoT. Without a greater degree of cooperation, the growth of the IoT is to be slower than it could be.

Along with this boost will come an increase in energy demands comparable to the one created by the Internet. In 2012, the data centers that powered the Internet were estimated to require 30 billion watts of electricity a year — enough to power a medium-sized town, and the Internet of Things is likely to require even more.

Even with improved batteries and green sources like solar and wind, just meeting the demand will be difficult. However, add issues like the wasted energy and pollutants, and powering the IoT could become a major social problem in its own right within the next decade.

Thanks to planned obsolescence, fifty million tons of e-waste — the disposal of computers, phones, and peripherals — are produced each year in the United States alone. As countries like China and India continue to industrialize, and the Internet of Things comes online, the problem is only going to continue. Meanwhile, less than twenty percent of e-waste is recycled, and despite the Basel Convention, much of the rest continues to be shipped overseas to developing nations where it is salvaged in unsafe working conditions.

Smart devices did not originate e-waste, but, assuming they are built the way that computers are today, with a lifespan of only a few years, they seem likely to double or triple the problem.

Storage of information generated by smart devices will increase the energy demands required by the Internet of Things. A single corporation like Google, which already has myriad server farms, each occupying tens of thousands of square feet, could be dwarfed by the demands of smart devices.

However, the physical demands are only part of the problem. Much of the data generated by smart devices is needed only briefly to send signals to device, and does not need to be stored. Other data, such as timers for devices, might ordinarily need to be stored for only a week or two at the most.

Yet with such information being available, the demand may arise for storing part of this surge of information for longer periods. Consequently, policies will be needed about what kind of information is stored, and for how long — to say nothing of who can access it, and the exceptions that might be made to whatever general policies are devised.

Potentially, the Internet of Things is a wealth of information about those who use it. Smart phones can already be tracked, but smart devices point to a future where governments supplement census information with the output of smart devices, and manufacturers harvest information about your habits so efficiently that they make Facebook’s insights into your interests and buying habits seem vague.

Imagine, too, being stalked by government agencies through your smart devices, or your devices being used against you in a court of law.

These are — probably — nightmare scenarios. All the same, you can expect the Internet of Things to produce dozens of legal precedents and class action suits as countries debate just what rights to privacy the users of smart devices retain and which they forfeit.

When faced with a choice between convenience and security for users, manufacturers almost always choose convenience. Even at this early stage, the Internet of Things is no exception. Already, basic devices such as routers, satellite receivers, network storage and smart TVs are ridiculously easy to hack, and 2015 was marked by the report of the first known successful cracking of a car while it was being operated. Such reports are inevitably greeted with cries of alarm, but, just as inevitably, little is done.

At any rate, no matter how secure a device can be potentially, users can be guaranteed to remove much of the security. For example, I recently bought a router whose default login that gives access to a configuration file stored on my computer was “admin” and “password.”

Similarly, Matthew Garrett, recently blogged in March 2016 about a London hotel in which cracking the entire network was no more difficult than connecting his computer into a tablet used to control the lights in his room.

Now, imagine such cases multiplied by billions of devices in the near future. Suddenly, our current lack of security and privacy seems trivial compared to what probably awaits us once the IoT is up and running. 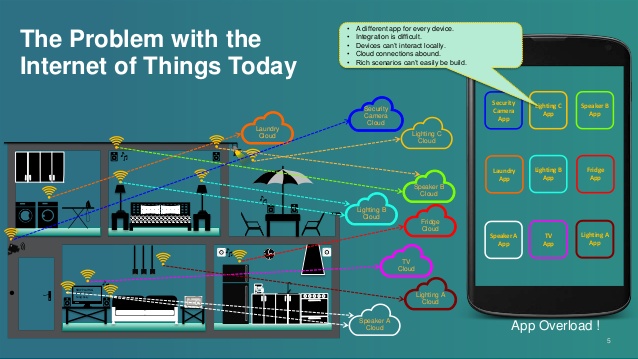 However, the last few decades have seen enormous revolutions produced by everything from the personal computer to the cell phone. If we can extrapolate from the challenges we have seen in earlier revolutions, we can at least mitigate those created by the IoT. If we do, then, if nothing else, we can be better prepared to meet the challenges that we didn’t anticipate.